Back to school and back to my normal routine as a home maker after the one month June holidays.  July also began the Primary One registration for in-take in 2015 for my 6 years old boy which all parents, included myself, was really concerned on the take up rate at each phase of the registration process.  On the other hand, it also means that my boy is graduating from his kindergarten at the end of the year.  According to my son, he will be performing as a peacock on stage during his graduation ceremony in school  he's going to perform Malay and peacock dance in celebration of the cultural day next Monday and not for his graduation. (He claimed to have forgotten and did not lie in purpose.)  This explained why he  borrowed a Chinese book from the library to know more about peacock.  To enhance his learning experience, I suggested to make a paper peacock fan perhaps another day which I found it here.  But he responded with such enthusiasm that I just have to oblige it! And we did it yesterday late afternoon whilst I trying to multi-tasking by preparing the dinner and at the same time, demonstrating/giving him instructions what to do. He chose the beautiful Indian/ blue peacock for his craft.  We made a semi-circle fan instead since we have limited green paper and create our own kind of peacock fan.
Materials :-
It's really easy and I'm proud that he has done it mostly by himself. :))  He got quite messy that you can see patches of ink smeared on the blue body. 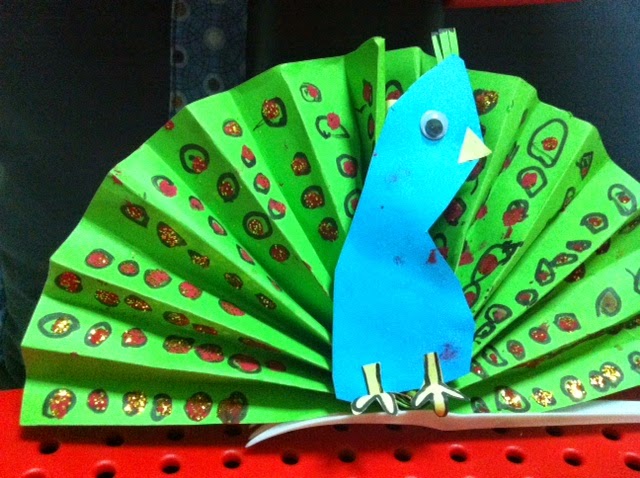 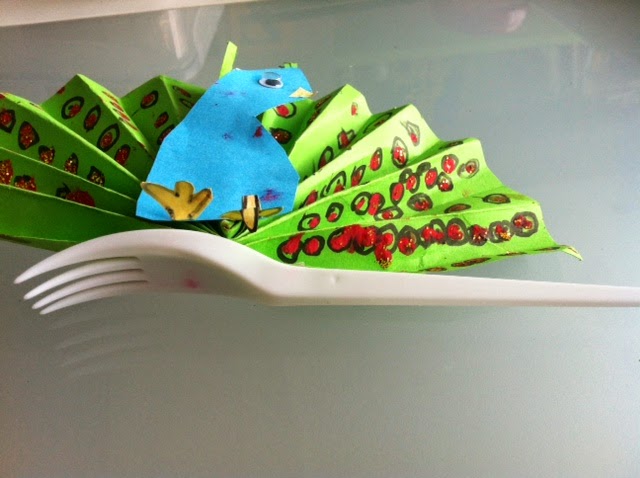 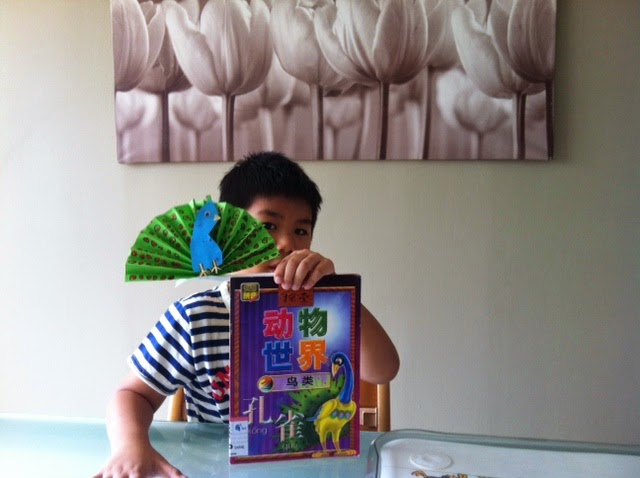 Posted by Dragonfly at 1:18 PM No comments: Links to this post

It is normal for a kid to lie.  Even adult lies too.  But to personally experience it myself with my 6 years old son is a rude awakening.

It has never occurred to me that my boy is capable of creating tall tales other than occasional white lies.  I was unprepared and shocked to learn about it.  It set me back into deeper thoughts and started to read up articles in the internet on 'Why kids lie?' and 'What to do about it?   Initially, he began with some white lies such as:-

which, in fact, he did not do it or rather he dislikes me telling him what to do.  At times, I caught him red handed and confronted him. He did not deny.  On the contrary, he laughed it off cheekily.  However, a recent incident triggered me to find out the truth from his teacher and only to discover that I have been misled into believing him that he has been constantly being bullied in the school.

Previously, I have heard from my son that a particular boy always picked on him for the last few months.  Because there was no serious injury or bruises physically, I asked him to inform the teacher and stay away from that kid.  Basically, I hope that he could manage himself.  His account of story:-

"Tripped, kicked, stepped and punched him when the teacher was busy or not around."
"Ambushed him when he was not looking."
"The bully was punished by the teacher and was locked out of the classroom."
"The bully fought with another boy by throwing beyblade at each other resulting minor cuts and bled a little near their eyes."

I was alarmed and cautioned that he should stay way from them to avoid being hurt. One day, I found a letter in his bag written by the bully that he was sorry for disturbing my boy and would not do it again.  That further affirmed my belief that he indeed has bullied my son for the past few months. Few days later,  he came home telling me that the bully striked again.  His account of story: -

"I was being punched, tripped and fell over."
"My forehead hit the floor and I cried because it was very very painful. "
"The bully also touched my private part as well as other kids too."

I was astonished and fuming that this child need help, so was my son.  I asked my son to pen down his feelings about this bully on a paper and send a strong message to the bully that he would not accept his apology.  Fearing my boy might get hurt since he was going for the independence camp at the end of May for 2 days 1 night in the school compound, I felt it was necessary to have a good talk with his teachers.

On 19 May 2014, a Monday morning before school, my boy told me that he could handle the matter himself.  I was sceptical but he was full of confidence.  I was determined to find out more from the teacher and hence, has requested the latter to give me a call.  When I picked him up from school, he again assured me that he has passed the message to his teacher and the latter would convey it to the bully's parent.  In his own words, he told me "Mommy, relax and soon will be over"!  In addition, he also said "I have shared the bad things the bully did to me with my friends so that they could also protect themselves too. "  Sound like he's the superhero of the day!

Finally the cat is out of the bag when I received a phone call from his teacher. I raised my voice and almost wanted to give him a scolding.  Teacher on the phone calmed me down so that I could have a good talk with my son.  .

1.  He was never bullied.
2.  The kid was a good friend and a shy boy.  Both often played together.
3.  There was absolutely no beyblade in the school.  However, the 2 boys indeed had a fight but in the computer room because one of them switch it off on purpose and angered the other kid.
4.  No complaints from other children that they were touched down there.  (After questioning him many times, he insisted he was being touched.  I had requested the teacher to watch out for it.)

Teacher commented that at his age of 6 years old, he exhibits maturity in his thoughts, knowledge and behaviour as compared to his peers. Most likely, he could not differentiate between facts and fictions, his rich imagination could have dramatized the episodes of each make up stories. There should not be a great concern if we, as his parents, could reinforce good values such as honesty from home.

Ever since then, we began to stress that we need him to be honest with us so that we can trust and believe him again.  Repeatedly, we also emphasized the consequence of lying like grounded or removed his privileges such as watching his favourite TV or toys.  There were times we still doubted him and asked him many times to confirm whether he was telling the truth.

I am glad it is over.  And hopefully, my boy understand and know his limit.


Posted by Dragonfly at 1:38 PM No comments: Links to this post