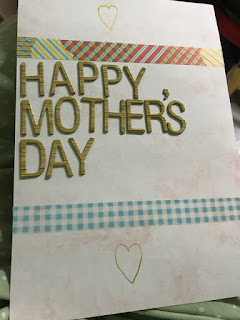 Do you honor your parents?

Two weeks ago, I was literally heart broken when I was told by my dear 9 years old son that 'we do not celebrate Mother's Day in our house'.  That moment, I felt that I have failed my duty as a parent!  I began to question myself whether I have raised a child who lacks empathy towards parents.  Filial Piety, a virtue of respect for parents that I firmly believes begins at home.  Have I been too focused academic performance that totally neglected in character building for this little one?  What kind a person he will become? Upon reflection on my parenting journey, I come to realise that apart from the teachings in kindergartens and schools, kids learned from parents too. Papa, is the root of the problem.  He is brought up in a tradition Chinese family where woman is meant to serve the man and does not have equal status in a household.  He is a  'Male Chauvinist Pig' that I guess, has an influence over my son's behavior.  I hope to change the mindset of my son (since I am totally helpless with his Papa).

Despite wrenching heart moment, I cajoled my boy to make a Mother's day card for me instead.  Most importantly, I reminded him that there is no need to buy expensive present to pamper your mother now.  (He can shower me with gifts when he grows up as a working adult later ;) And I even showed him what he had made/created during his preschool/kindergarten days like a jewellery box made from ice cream stick or a simple card with love message that, some of which, I have kept it. 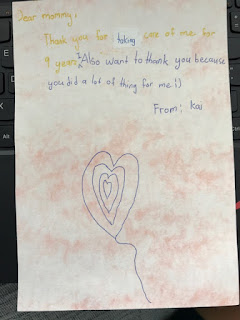 I hope there will be some nice surprise from him next year.

Posted by Dragonfly at 12:04 PM No comments: Links to this post