Primary two (P2) has been a breeze for my boy just like in his first year (P1).   April was also especially relax for the kids probably, because it was their birthday month. Since there was no streaming for P1 and P2, the school allocated student to their respective classes according to their birth month. And his class 2E has a mix of April and May babies. His form teacher was also busy giving out printed birthday cards and chocolate to the birthday kids. In addition, my boy came home with goodies bags every week and invitations to birthday parties too.

In one of our everyday conversation during lunch time, he shared with me how he managed a naughty boy who has been (since P1) hitting kids at school.  (I had also enquired with his form teacher if there has been any bullying in class and the latter did not think so. Apparently, the naughty one went for counselling session and detention class but with little improvement.)  His eyes lightened up and was beaming with pride as he described the situation.  If the naughty one punched him, my boy responded with "Thank you for the massage!" instead of hitting back.  My son challenged this naughty one in arm wrestling and won.  Defeated and astounded, the naughty one exclaimed "You are like an incredible hulk!"  After that, this naughty one has been nice to my boy to the extent that my son said that "He has been kind to me."   But a leopard never changed its spot.  The kindness probably last for a week or so and the naughty one was back lashing out at the children again.

My boy knew retaliating would not stop this naughty one from hitting him.  He knew his strength and capitalised on a game of arm wrestling that unexpectedly turned to his advantage.  Witty and unpretentious!  I was so proud of him.  Bearing in mind,  this is NOT a guidance of how to handle bully but just pure sharing of experiences.

Posted by Dragonfly at 3:32 PM No comments: Links to this post

A running/congestsed nose first for about two weeks and followed by a mild cough at night due to phlegm and irritated throat.  And it started right after the end of March that prolonged till close to his birthday.  No thanks, to cold drinks, ice cream and sweets that he had consumed during the one week March school break.
I was pleasantly surprised that he had requested to invite his best friends from class 2E to celebrate his 8th birthday this year.  I obliged on the condition that his cough would not worsen.  Luckily, he was all well with occasional cough.  Hence, we carried on with our plan to have a mini celebration at home.  I did not prepare my much but he was delighted to have his friends over. A simple fair with a non-baked lemon cheesecake, some potato chips, pandan flavoured konnyaku with bites of canned peach, fresh strawberries and a tin of strawberry flavour wafer sticks contributed by Granny.  My lemon cheesecake tasted too creamy and not to their likings. I should have made an oreo cheesecake instead!   He did not want an elaborate cake this year.  Therefore, I made cake bunting topper with washi tape which I found an easy tutorial here. As for the goodie bag, I stuffed it with a few pencils, a coloured folder, oreo biscuits, M&M peanuts, sweets and a lollipop. My boy hand written each 'Thank you' card and pasted it on the brown paper bag which I transformed into a carrier.
The mini celebration went well.  The children were enjoying the ipad games as planned.  Then I noticed one boy, Emmanuel appeared grumpy and walked away from the group.  Being concerned, I asked him why he did not join them for the game.  And I was told that my son was not sharing the games with him and pushed him away when he asked for his turn to play.   That would be the last thing I wanted to hear from a child.  I assured him that I would reprimand my boy (which I did) and urged him to re-join the group.   Guilty as charged, my boy immediately shared his ipad.   Perhaps my selfish son had upset Emmanuel or may be, it was because Papa refused to login the wifi connection for Emmanuel to play online games, he casually mentioned it would be more fun if there were more children. I felt like a lousy host :(  Despite the short-lived unhappiness, the kids had fun together in the end. 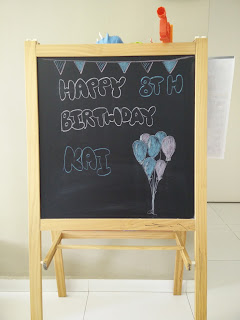 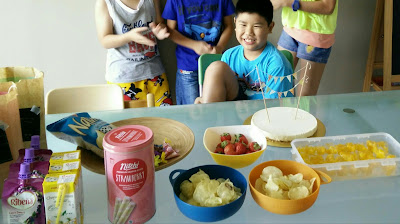 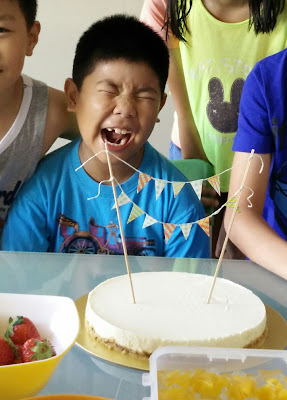 This year was special.  It was his 8th birthday.  His birthday date was on the 8th day.  And he was born in the year of 2008!  I did not realise it until I was writing this post.
Together with Papa, whose birthday was one day after my son, we went to Sentosa Adventure Cove over the weekend as their birthday treat. Our first visit to the waterpark.  Since my boy loves animals be it on land or in the sea, Papa booked the Dolphin Discovery programme at the Dolphin Island for an up close and personal interaction with a dolphin named Sheng Guo.  It was heart warming to learn that Sheng Guo is striving and have had many babies there.   The session was educational and interactive for the children and adults.  At the end of the session, I liked the fact that they conveyed a green message on how we could do our part in our daily lives to protect marine wildlife.  In particular, plastic waste, human produced, used and dumped into the sea, when reached the ocean marine animals would mistaken it as food which were harmful to them and/or entangled, possibly leading to death.  To reduce plastic waste pollution, we should bring our own bag and stop to use plastic bag when we shopped.  A valuable piece of advice and certainly, nothing beats a great outdoor lesson.
We spent our morning at Dolphin Island and lazy river where we went two rounds on the float because of the stingray viewing panel in the midst of it that my boy insisted to see again.
A thunderstorm poured down suddenly around 1pm which the waterpark ceased all activities temporary.  Hence, we headed to the Bay restaurant for lunch and waited for the rain to stop.  And it did stop an hour later, we were relieved that we could continue to play.  We headed for Rainbow Reef where my boy's first snorkelling adventure was more of a tiring and irritating experience because water seeped into his mask and he was not able to keep his head below the water.  But the Riptide Rocket (a water roller coaster) compensated all.  Mummy chickened out and the two dare devils gave a thumbs up.  It was quite a small waterpark but the queue for the rides in the afternoon Saturday was 40 - 50 minutes.
The two birthday boys had a whale of a time at Sentosa Adventure Cove! 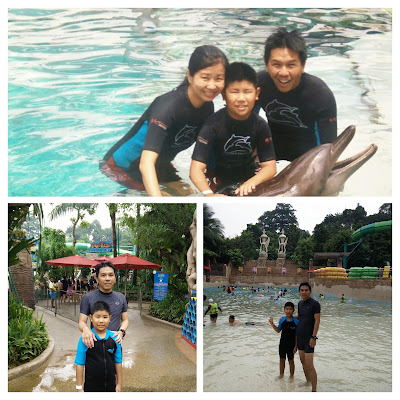 Posted by Dragonfly at 12:37 PM No comments: Links to this post


I prepared this bento lunch for my boy with the intention to submit for the International bento contest organised by Bento & Co.  The theme for the year 2016 is 'Sweet Tooth Bento'.  And the criteria is a classic bento preparation with a main dish and a desert or any sweet dish in the bento box.  I have seen many gorgeous creation for the past years' contests but did not have the courage to submit mine.  What caught my eyes was to prepare a classic bento!  A traditional bento holds rice, meat, fish, pickled or cooked vegetables in a box shaped container per Wikipedia.  And I think I can pull it off.   I told my boy that it was a sweet tooth bento.  He commented "There's no sweets.  Just healthy sweets (treats)."  Guess he expected some real candies in the box ;))

Have you submitted yours?
Posted by Dragonfly at 4:13 PM No comments: Links to this post