Cycling and Swimming - a must learn skill

Over the years, my son has rode different size/type of bicycle.  First he had a four wheels bike that passed down from his cousin.  After the old wheels worn out, Papa bought a BMX bicycle (still with the four wheels) which he learned to ride on two wheels without much effort or help from us.  And I have blogged it here.  Last year, Daddy splurged on a 24 inch mountain bike (Trek superfly).  My boy was, of course, overjoyed to receive it and has since cycled to Pasir Ris park and Changi village with it with Papa.
I remembered we had a conversation with his Singapore 'pak pak' about what skills must we equip our boys during their childhood stage. Cycling came up top in the list as well as swimming.  And we did instil the interest easily on cycling so much that we would make it as a family outing to the park.  My son enjoys and loves it till today.


Swimming, on the other hand, was not his favourite sport.  My boy started his swimming lessons with Total Swimming at United World College, the East campus, 5 years ago when he was 3 years old.  And he picked up free style, breast stroke, back stroke and butterfly progressively.  It was pretty fun in the beginning,  But this year,  he was less keen and has asked me many times to stop his swimming lesson.  I have persisted a few weeks with lots of encouragement and explanation on the benefits of swimming as well as sending cues to the lady incharge of Total Swimming that my boy have lost the interest.
Mommy is reluctant to give up swimming because of a bad experience we had at the wavepool in Darwin, Australia in 2013.  He was 5 years old then.  The wavepool was awesome.  All of us were thrilled and had so much fun riding on the surge of waves one after another on a float.  A terrible thing however happened! A huge wave swept my boy away from us.  Vividly, I remembered that my boy was floating above the water like a rubber toy.  He did not struggle or scream.  My heart was racing.  It was a hair raising moment encountered with near drowning.  I panicked because he seemed drifted much further and faster no matter how hard I swam.  We were thankful that the lifeguard there was alert and saved him.  Where was Daddy?  He was far far away from us.  Honestly, both my hubby and myself were not good at swimming.  Therefore, this incident was the compelling reason that my son must learn to swim well although he did not like it that much.  Hence, I decided to switch to another swimming coach and a change of environment might help to revive his enthusiasm. 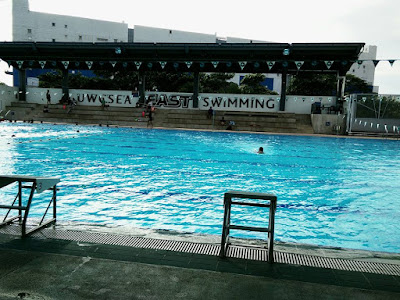 Posted by Dragonfly at 9:58 AM No comments: Links to this post

Crab missing a pair of legs


School reopened on Monday.  The boy has difficulty getting out of the bed early in the morning even if the alarm rang incessantly at 6.10am.  He dragged his body to the bathroom after snuggling in the warm bed for another 10 minutes.  Honey oatmeal with poached egg for breakfast and a cup of warm milo to kick start his engine. I had the same minus the egg.  Papa had cereal with milk instead.  Oatmeal was not my boy's favourite food with the exception of cold overnight oats.  Daddy detested oatmeal in any form and literally telling his son "It's yucky" while my boy polished off the remaining oatmeal in his bowl in silence.  I would really appreciate and wish he could keep such comment for discussion at another time and place rather than first thing in the morning at the dining table.

Lunch was :-
And he decorated his own lunch with the ingredients. I  love his idea although the crab was missing a pair of legs.

Weight has been an issue for this young man and his has been hovering at the 'acceptable' level. He would normally put on weight during festive seasons and school holidays because I did not restrict or take away his pleasure of enjoying his lolly pop, chocolates, cakes, soft drinks, fried chicken, burgers and fries...etc that I allowed only that period.  And he knew mummy controlled his diet daily that he would request 'this' and 'that' whenever he had an opportunity during these special days.  It was hard not to give.  And he was wary of being overweight as evidenced in his conversation with me before bedtime lately:-

Best to stay fit and healthy ^_^
Posted by Dragonfly at 10:47 AM No comments: Links to this post

We have reached the tail-end of school holidays and my boy began lamenting that it was too soon to be over.  We were so pre-occupied for the first time during the one week school break.
Actually, I also planned to bring my boy to meet his pen pal from Switzerland whom has just relocated to Singapore for couple of years.  Squeezing into the schedule would be a mad rush and too tiring for both of us. Therefore, I shelved it for the next school holiday.
The battleship playground has been in our "to-play" list and I have postponed many times purely because I was too lazy to travel from the east where we stayed to the far north of the little red dot.  In order not to disappoint the big boy again, we started our March holidays in the northern part of Singapore.  A stayover at Grandma's house on Sunday night.  Then, a breakfast treat at Burger King together with an old friend/neighbour and her kid/nephew at Sembawang Shopping Center the next morning.  Followed by free play at Sembawang park where the boys had a blast at the battleship playground. The sun was not forgiving.  And they had to forgo the idea of sliding down the slides because it was too hot.  But that did not stop them from playing.  The playground was huge and great workout for these rascals. Plenty of space to run and climb.  Just to be mindful that children need to stay low on top of the battleship as his friend, Xian Xian, accidentally bumped his head against the structure.   And some parts proved to be a challenge for the boys.  The kids dug an unbelievable deep hole in the sandpit where they buried a plastic toy dolphin in the hope to retrieve it on the next visit.  I was amused and felt like a scene in the Chinese drama television show.
It was a beautiful day and great outing.  However, the sight of oil rig nearby marred the sea view.  We left the place close to noon.  I love SG playgrounds.  How about you? 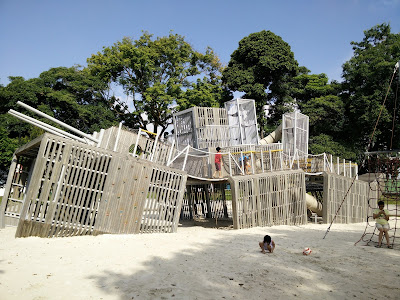 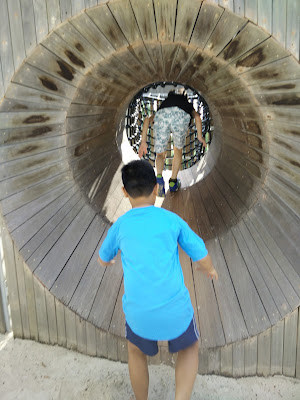 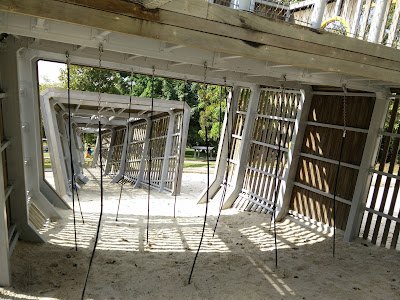 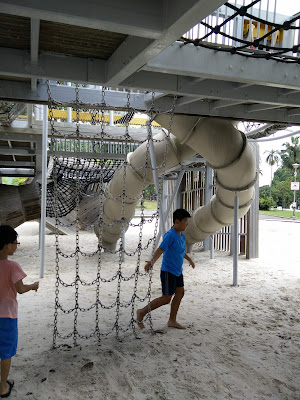 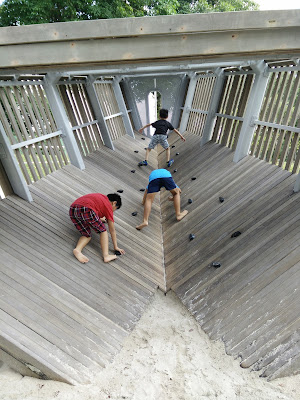 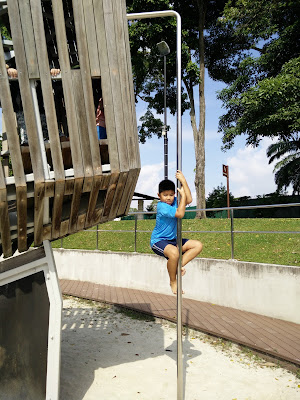 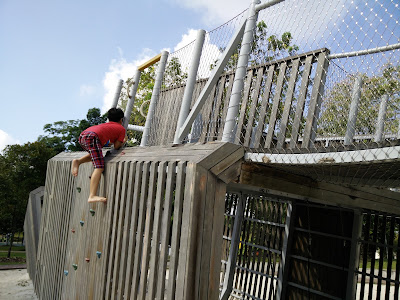 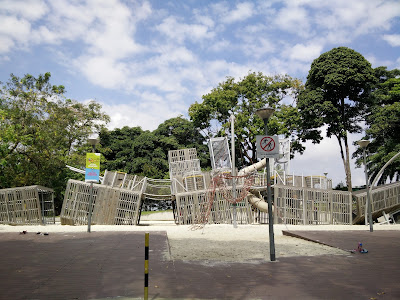 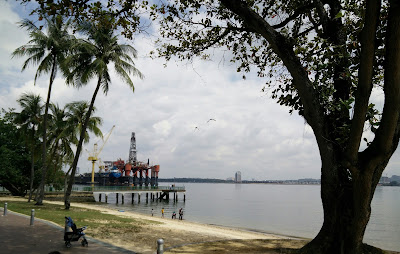 Posted by Dragonfly at 10:25 PM No comments: Links to this post