Recently, we had a conversation on the physical difference between boy and girl.  And my boy touched on the genital parts of his body.  He asked "Why Mommy does not have a 'pee pee' (the crown jewels)?"  And I replied straight forward that "Because I'm a woman (girl) and you are a boy (man)".  And he said "No, because Mommy is an alien.  Alien does not have a pee pee!!"  I found it pretty hilarious and thought that he had a good sense of humour too for a 5 years old child.  Don't you think so?

The above bento, nonetheless and of course, inspired by my little one.  An alien that was made of tofu, red pepper, yellow cheese and seaweed.  And the outer space like the stars, moon and planet were maple baked ham and orange cheddar cheese. In the box, he also has pan-fried chicken thigh, blanched broccoli and black grapes.﻿﻿﻿﻿﻿﻿﻿﻿﻿﻿﻿

We like to go to the library near our neighbourhood for storytelling session every Tuesday after his school.  He got to meet different librarian and their unique style to keep their story interesting and captivate these young children.  And my boy and myself personally like one particular male storyteller because he was the only one so far who could keep the children sat still and attentive to his story.  We also especially love it when the librarian involved the kids to participate inside the story line.  Like this librarian began with a nursery song - This old man and, held a puppet with 10 pockets on his jumper.  Each kids was supposed to place an object in these little pocket as they sang the song.   They had a ball of fun indeed before settling down for storytelling session.
﻿


Posted by Dragonfly at 2:13 PM No comments: Links to this post

During the one week school holiday in September, we flew back together with Auntie Lilian and Uncle Chin Weng to my husband hometown in Kedah, Malaysia to celebrate Ah Ma's 90th birthday. She has recuperated well after a terrible fall at home which rendered her to be hospitalised at that time.  Despite her old age, she is one feisty and iron lady who demonstrates a strong and sharp mind.  Still wheel-chaired bound and yet she diligently did her morning exercise with the help of walking frame (aid).  Certainly high in spirit and in good health though.  We had a vegetarian dinner prepared by the chef of the day i.e. Lai Gu and all the 姑姑s.  A great evening for the young and old to catch up with each other (just like we did in the Chinese Lunar New Year).

I also called this a makan (means eat in Malay language) trip mainly because we have been pampered with all sort of yummy food in Penang and Kedah. Highlights would be :-
at Penang - the charcoal grilled toast at Toh Soon Café, Ayer Itam assam laksa and;
at Tanjung Dawai, Sungai Petani, Kedah - fresh seafood
We had a lot of coffee and toast cafés in Singapore which offered classic breakfast like charcoal grilled kaya bread, soft boiled egg and coffee in an air-conditioned environment.  But Toh Soon café in Penang appears like a run down shank right smack in a back alley. Yet, the café was bustling with locals. It would be difficulty to locate the café without Yin Yee Jie Jie.  We like the soft white bread charcoal grilled till it was charred.
﻿
﻿ 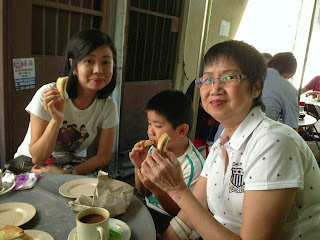 I have long heard that the best street food in Penang usually found in dark, dirty and smelly alley. That was why I was really sceptical and not keen about trying the laksa there.   In fact, the famous assam laksa at Ayer Itam in Penang is one true living example.  It was raining like cats and dogs that Saturday after we came down from a tour to Penang hill.   May be it was windy and the wet market was closed.  It did not occur to me the place was really filthy and smelly but my hubby said that the condition of the place was much better now than previously.  The assam laksa was indeed rich, thick and flavourful.  I really enjoyed it and I must say that it was the best laksa I ever tasted!  Even my boy was game enough to have a spoonful.  But our dear Yin Yee Jie Jie accidentally shoved the chilli  into his mouth. Oops!  He almost teared and luckily he did not throw out the food.  He continued eating his favourite fried popiah and fish cake. 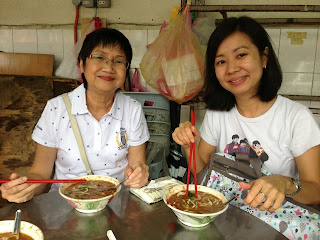 Singaporeans generally headed for Malaysia for its seafood which is cheaper due to the exchange rate difference.   Sam Pak (三伯), who is a fishing enthusiast, knew where to find the best seafood in Kedah.  Tanjung Dawai here we come!  A fishing village, 30km away from Sungai Petani in Kedah.  It was really quiet on a week day.  Sam Pak led us through a small alley where the fisherman kept the mantis prawn in a big holding tank as well as other seafood.  We saw live mantis prawn for the first time.  Then we brought along our supply of seafood to an old ramshackle restaurant by the jetty to be cooked by the chef. Besides curry crab, prawns, mantis prawns, there were also  steamed fish and a plate of stir-fried vegetables.  It was indeed a very fulfilling, enjoyable and finger licking good lunch!  Even my boy who dislikes prawn also dug in and ate four large prawns and one mantis prawn. Thanks to Sam Pak, who was our host and also our chauffeur, brought us to this little known fishing village.

There were many more delicious street food in Penang and Kedah. Even their simple chee cheong fun was nicer.  To me, the most uncommon eats we ever ate were cuttlefish kangkong at Gurun and Steamed flat noodles (蒸大盘).  It's a pity that I did not take a pictures of the these.  Wow, blogging about food makes me hungry!


Posted by Dragonfly at 1:46 PM No comments: Links to this post

Inspired by A Happy Mum.

In a gallon size ziplog bag
6 tbsp. of salt (I used fine salt found in my kitchen)
Ice cubes to fill half of the bag

Posted by Dragonfly at 10:34 PM No comments: Links to this post

We are back from one week holiday in Malaysia.  Prior to departure, I wrote this post and did not post it somehow.
Dated 4 September 2013
Weather has been quite unpredictable.  One moment is a bright sunny day and the next, starts to rain.  It really takes a toll on the little one's body.  Although my son is still nursing a running nose and a mild cough, I am relieved that he still has the appetite for food.  And he requested tamago temaki for lunch today.  He finished the temaki but he did not eat the apple.
Teacher's day falls on this Friday, 6 September 2013.  We DIY a notebook for his English teacher, Ms Alice and Chinese teacher, Fu Laoshi.  Nothing new and refreshing, I just recycled the idea last year ;)  However, I spent a little more on pretty scrapping paper and washi tape.  And more elaborated on the decorations.
﻿

Posted by Dragonfly at 12:08 AM No comments: Links to this post