He was looking forward to his first 3D2N school camp at Labrador Park.  Not camping in a tent but slept in the dormitory. Excited and elated!  He woke up super early in the morning and went to school for the briefing.  One day after he was back home from camp, he was down with fever, cough and running nose that lasted more than 5 days.  As a result, he was not able to take his CA2 test paper for Chinese that was scheduled after the camping trip.  He was not the only one who caught the virus/bateria.  There were many other children who fell sick.  Some recovered quickly and some did not.  From the grapevine, we heard one kid was hospitalised due to high fever   There were many questions popped up in mind.  How did my boy got the virus?  Hygiene issue?  Insufficient sleep?  Dehydrated? And how to prepare him for the next camping trip, if any, so that he will not fall sick easily?  As a parent, it was heartache to see our children cried in pain due to illness.  On the other hand, we wanted them to strengthen their immunity system and fight of disease. To keep them indoors?  I felt that we need to expose them to dirt and germs to develop a healthy immune system instead of a sterilised enivronment. 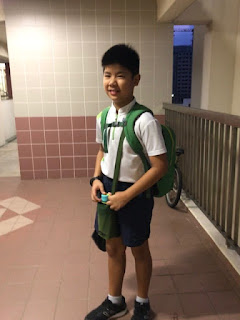 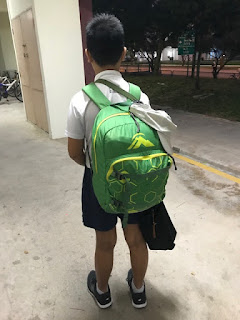 LESSONS LEARNT
The packing list provided by the organiser was exhausive.  To adhere to each and every items, we felt he woud have overpacked. For instance, the list indicated to pack extra sport/school shoes as well as track pants.  Instead, we reduced to one set each.  It turned out that he wore the same hiking pants for 2 days which I have no issue. From the photos taken during the camp, some students did not even wear their track pants.  So it was very much dependent on how flexible or strict was the "Mentor" attached to the group.   There was no water activities, hence a pair of sport shoe was sufffice in his case.

The mummies group chat also raised their concern over whether to let the kids bring the sleeping bag or bedsheet on the basis that mattresses were provided inside the dormitory. Teacher advised it was compulsory to bring sleeping bags. For my boy, he brought an extra sleeping bag liner and did not lay his sleeping bag on top of the mattress. He claimed that the mattress was pretty worn out and dark black patches all over it.  I suspected he just rolled on the mattress and slept.  Without the extra layer protection, the bacteria could have happily found its way into his sweaty and warm body.  Moreover, he has sinus every morning and coupled with sneezing and running nose at times even at home.  In essence, it was recommended to bring their own sleeping bag regardless the weather was hot and humid.  The dormitory was well ventilated; with fans and windows were installed with mosqito net.

Next, body need to be hydrated!  Although he brought along a litre water bottle,  I guess he did not drink much in between the activites. Some of the students did not even brush their teeth.  That was why he had such a bad breath after the camp.

Not all the children have the habit to bathe in the morning.  But I think it is necessary during their camping trip to cool down their body since they sweat in their sleep due to hot and humid weather.  Dirty as well after super and night acitivities.  When I discovered that his bath gel and shampoo returned home intact, obviously he did not shower despite his denial.   The complaint was he was not given enough time to bathe.  I reminded him that he need to act fast and not taking his own sweet time like he always did at home or engrossed talking to his classmates.

I hope he learnt his lesson well. 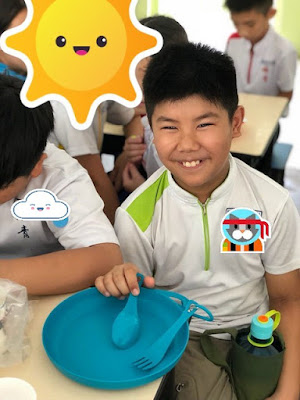 Prescribed with antibiotics, his fever finally subsided.  Yipee!  His first comfort was vegemite spread on bread in the morning. 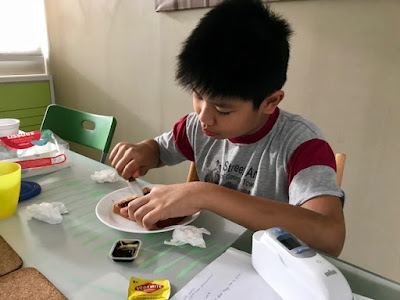 Posted by Dragonfly at 10:56 PM No comments: Links to this post