It was a luxury nowadays if I ever made a bento for him.  And he still loves it. The salmon onigiri was supposed to shape like a pair of mandarin oranges but looked odd.   I should have used tomato sauce instead for a deeper colour.  It was mandatory in our Chinese culture to bring a couple of mandarin oranges for house to house visit. 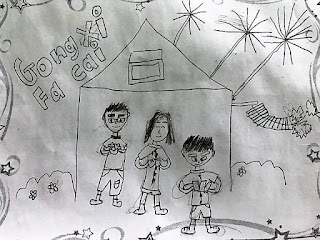 My boy drew a family portrait using Chinese New Year as the theme.    His inspiration came from his experience with the sight and sound of firecrackers and fireworks in Malaysia. Amazingly, he even concluded that Mummy has a round face and Papa got an inverted triangle face.  As for himself, how about making a guess?  Other details he sketched like Papa was holding ancient Chinese gold nuggets, Mummy with the mandarin oranges and the boy has a handful of red packets.  Absolutely adore this picture !

We wish everyone 恭喜发财 Gong Xi Fa Cai and a prosperous year!

Posted by Dragonfly at 11:04 AM No comments: Links to this post

Posted by Dragonfly at 10:07 AM No comments: Links to this post

We flew back to Malaysia last Friday for reunion and Chinese New Year celebrations over the weekends from 27th to 30th January 2017.  Although it was short trip, we were excited especially my boy because we would be staying at his 3rd Uncle's house and he was expecting fireworks and fire crackers to play in Papa's hometown.  He missed it last year 2017 because we put up in Eastin hotel, Penang and my boy was quite disappointed.   Like a eager beaver, he was looking forward to Malaysia trip.  Nothing beats the feeling of being back at 'home'.

For the first time, my P3 boy would skip the celebration in his school because the eve of Chinese New Year happened to be on a Friday which means children supposed to go to school.  And he was more than happier not to attend school.  Yeah, he began to feel the pressure from loads of homework given daily and has not been able to enjoy schooling since.  On top of which, he has to go for extra badminton training twice a week because he was selected for the school team.  By the time, he finished his training, reached home and cleaned up, he was dog-tired and would head straight for an hour of nap.  There was a day, he only managed to complete his Chinese composition close to 11pm.  It was way way past his normal bedtime which I set at 9.30pm. I am not sure if he could persevere.  In spite of the tiredness, he is pretty firm on his decision to be part of the school team. I hope he could cope better in the later part of the school term.

Since he started his primary school, it was a tradition to bring lanterns that made from Angbo paper (red packets) to decorate his classroom during the festive season.  We made two ancient coin lantern. It looked like a numeric 8 which symbolised wealth and lucky number in our Chinese culture.  We upcycle last year's lantern and decked it out in our living room.  Since it was the year of Rooster according to Chinese Zodiac, it became a yearly affair that we bought a pair of fowls (picture) to welcome the new year! 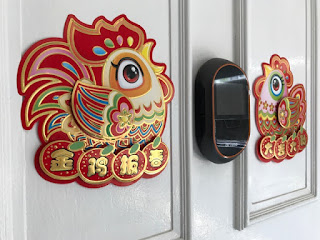 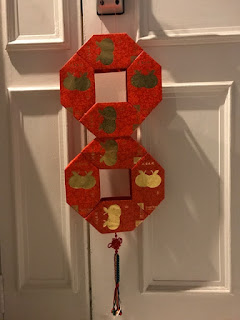 I baked some pineapple tarts this year using receipe from the Noobcook together with my son.  It was my first attempt.  The tarts were crumbly and buttery, almost biscuit like instead of the melt-in-your-mouth type. Also, I did not prepare the pineapple paste.  Instead I bought the premium from Bake King which it did not taste so sweet but lacked the 'oomph'.  The overall taste was not bad but pale in comparision with those really good home baked pineapple tarts which they cooked their own pineapple paste from scratch.   My boy, the Mr Nice Guy, however, thought that mine was nice and even commented "I prefer Mummy's pineapple tarts.".  It warmed my heart but I knew he was not telling the truth. 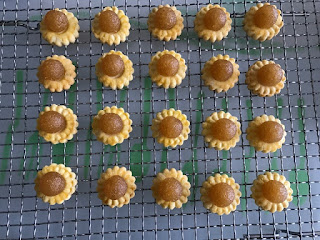 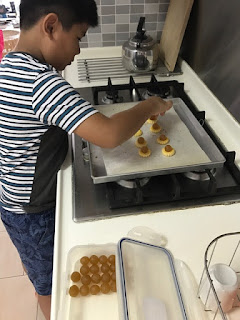 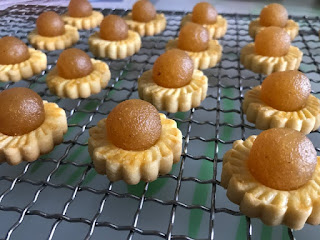 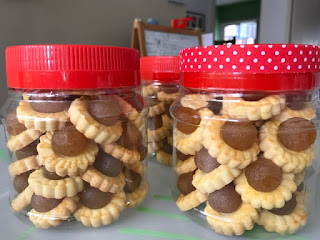 Posted by Dragonfly at 4:01 PM No comments: Links to this post