Kyoto has over a thousand temples and shrines per se.  Most of them were easily accessible by bus and trains.  The close proximity of some also set us astounded as if all the temples were congregated here.  The popular ones, inevitably, would be flooded with tourists like us and the Japanese students.  But it was well worth the visit despite overcrowding in these places.

Since it was our first visit to Japan, we did some home learning with my boy on the difference between temples and shrines before the trip.  Shintoism originated from Japan and has been their tradition religion before the introduction of Buddhism (from India/China). It usually characterised by the torri gate at the entrance.  The names often ended with 'jingo' (神宮) is a Shinto shrine.  Whereas, Buddhist temples came with a  'dera' or 'ji' (寺).

12 June 2015 Kyoto Kiyomizu-dera 清水寺/Kodaiji 高台寺 temples
Osaka Mitarashi komochi - these plain looking little rice cake with sweet soya sauce filling which we bought from Kuromon market in Osaka, was surprisingly so good.  We ate as breakfast and within a few minutes, all the rice cake were gone! We could not do without a good coffee in the morning.  Papa recommended Espressamente illy at Kyoto station which was very popular with the Japanese due to its value for money breakfast set.  It was pretty crowded but managed to get a table in the non-smoking area. The place was small and the non-smoking and smoking area were only partitioned with a glass panel.  Hence, the non-smoking still smell strongly.  So, we swiftly moved out and went for take-out instead.  The coffee was excellent and literally perked us up! 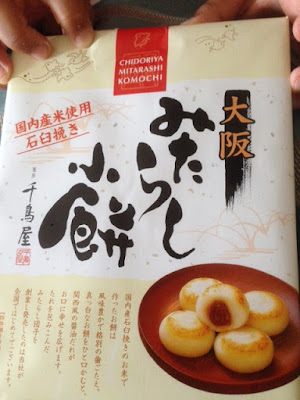 A long queue has formed when we reached the city bus terminal near Kyoto station's Karasuma exit.  They were lined up for the Raku buses which operate a loop service that stopped near temples/shrines in the city specially for tourists.  A one-day pass at 500 yen would probably be the most economical means to hop from buses to buses as many times you like.  We paid 230 yen for adult and 120 yen for child per trip using suica card. Unless you planned to ride more than 3 times on the buses, otherwise the difference was quite negligible just for 2 temples.  The following links were helpful when travelling on Kyoto city bus :-
Either Raku bus No. 100 or 206 would bring us to Kiyomizu-dera.  We hopped on the former and dropped off at Gojozaka.  A short walk uphill and some steep stairs to the top lead us to the orange structure 'Deva Gate'.  Kiyomizu-dera was founded in 778 and under the UNESCO World Cultural Heritage List.  The attraction was the main hall (Hondo) with a veranda. 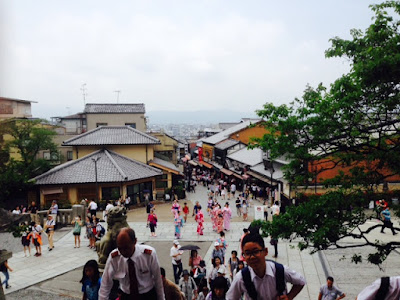 As we admired the Main Hall (Hondo), a kind Japanese elderly man gesturing us to take a family picture for us against the backdrop.  We were touched and blessed to meet friendly people in Japan throughout our trip. 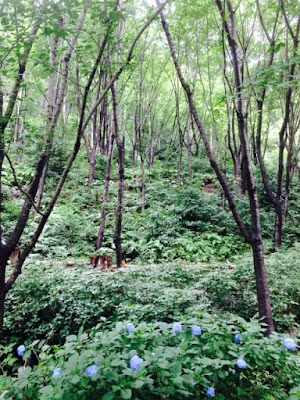 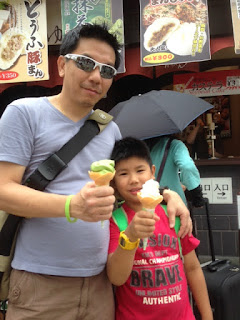 Soft serve ice cream again !?!? Yes, we had it almost everyday in Japan.  Particularly, after a long walk and a hot weather! And, the best way to cool down too.  As we descended downhill, there were lots of souvenir shops, restaurants, café, Japanese sweets shops and many more, lined up along the Higashiyama district.  The latter has the best preserved district with narrow alleys and wooden buildings, reminiscing the old Kyoto.  With stream of people walking down the Sannen-zaka stairs 三年坂 (three year slope) and Ninen-zaka stairs 二年坂 (two year slope), I had to kept reminding my son to be careful and not to fall down.


After a cold soba lunch in one of the restaurants, we walked to Kodaiji for its beautiful designer's gardens. Kodaiji, a zen Buddhist temple, built in memory of Toyotomi Hideyoshi in 1606. The temple featured a rock garden that consisted of raked gravel, tea house and bamboo groves. To enjoy the peace and serenity of the surroundings, it was better to keep the noise level down.  As we entered the main hall (Hojo), we were being frowned at when our son suddenly got so excited over the zen interior and rolled on the floor. 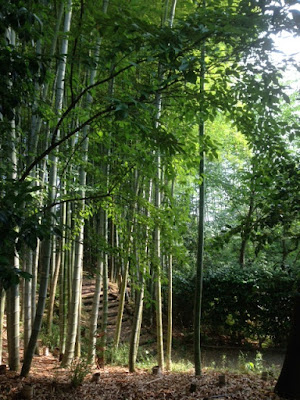 We spent the rest of the day walking around Hanami-Koji Street (花見小路) in the area of Gion (祇園), one of the Kyoto's geisha district. It was also one of those places swarmed with tourists who came here for its traditional wooden machiya merchant houses. Then, we took a stroll at the scenic Shirakawa Area (白川) that has a canal running through.  The place was lined with willow trees and we felt a sense of calmness and tranquillity here.

As the evening approached, we headed for Pontocho  (先斗町) to experience yuka outdoor dining facing the Kamogawa River.  A popular pastime in Kyoto during Summer. Many restaurant offered Kaiseki dinner (Traditional Multi-Course Meal) and kabuki performance.  We were at the right place and right time to be able to spot some geisha hastily walked past us. 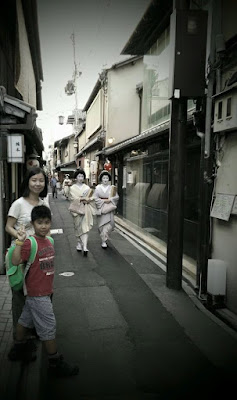 I picked Kyoto Yamatomi which seemed affordable.  However, a regrettable decision I made.  It was an unpleasant dining experience and hospitality we encountered.  We ordered tempura set meal which consisted of many sides like sashimi, tofu, salted fish, rice, noodles and dessert.  The vegetables were skewed in a stick like kebab which was supposed to dip it in the batter and deep-fry inside a black iron kettle ourselves.  Probably we could not control the fire or we were too slow, the obasan (old lady) abruptly came over to our table and started helping herself to deep frying the food for us.  We were in for a rude shock when she began mumbling to herself like a grumpy woman in the midst of frying.

Although we could not enjoy our dinner, it was a fruitful day nevertheless.  We still looked forward to the rest of our itinerary.


13 June 2015 Osaka Pokémon Center
We were back in Osaka again for the little one - Pokémon Center.  It was his favourite cartoon series and character.  The store was located inside Daimaru shopping mall in Umeda.  Usually it was the adults we saw carrying shopping basket.  But here, it was the little ones' haven!  To follow the trend, Papa gave him a basket too for his shopping spree and a budget to spend.  And he really spent hours browsing and choosing the stuff even although the store was pretty small. 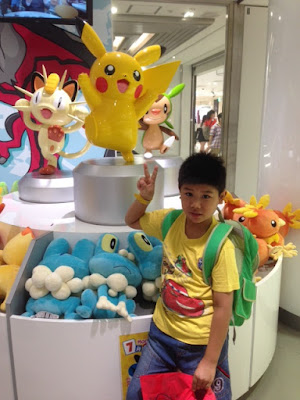 We basically did nothing much of sightseeing except eating and shopping the whole day. What's for lunch?  Fresh udon!  We had a fabulous time lunching at Umeda Hakagure.  We had soup udon that came in clear broth and light sauce soup.  Whereas my boy has cold udon with raw egg.  Simple and yet delicious! Good and cheap too. The friendly owner who could speak simple English even taught us how to eat udon.   It was heartening to feel welcome again after our lousy dinner at Kyoto Yamatomi.   Everyone were smiling and laughing as the owner cheerfully chit chatting with them.  We had a great time indeed and thankful for the warmth hospitality the owner has shown us.  It certainly worth waiting in the queue. 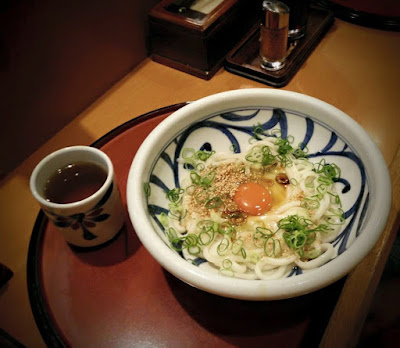 We did a lot of window shopping largely in the underground shopping mall before we retreated back to our hotel in Kyoto.

Posted by Dragonfly at 9:16 AM 2 comments: Links to this post