Oatmeal has never been my son's favourite meal.  Yet he seems to like the chewy and more texture type which I prepared for him in the bento above.  And I sort of 'label' it with the word "Zoom" to match the theme since he requested for a hard boiled egg in the shape of car.  He also had blanched broccoli/carrot and grapes.

Yesterday, I intended to bring him to Changi City Point to learn more about green building.  It is part of school project and another reason is he will not be able to go for the field trip to Changi City Point this coming Thursday (since we will be flying to Malaysia to celebrate Ah Ma's 90th birthday).  Unfortunately, I missed a turn :)  Instead, I headed for East Coast highway and ended up at McCafe at East Coast Park.  We had ice chocolate and oreo cheesecake.  It was nice to be away from the hustle and bustle shopping malls.  We were seated comfortably at the café; peaceful and quiet, enjoying the sea breeze and the sights of numerous ships anchored there.

Back home, he drew the ship and sail boat.

﻿
My boy has previously asked me if I could prepare cornflakes for his lunch.  And I turned him down mainly because it's not a 'proper' lunch I felt personally.  I made an exception today.  On his plate, he has car shape walnut bread which I spread some nutella to create the wheels and an elephant foodpick popping out from the window (made of cheese). Scattered some cornflakes to form the gravel road.  On the side was avocado milkshake. Not his usual kind of lunch but he simply loves it!!
We had a house visit from his form teacher, Fu Lao Shi, in June earlier.  She advised us to let him play dough to improve his fine motor skills.  Hence, we made our own play dough together one day.  Both of us had a lots of fun kneading and punching the dough in the kitchen. The dough, however, was a little soft and grainy in texture.
﻿ 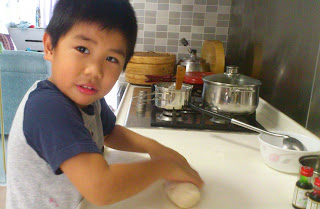 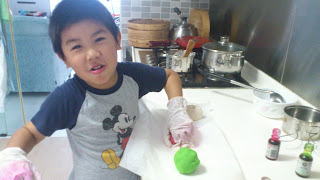 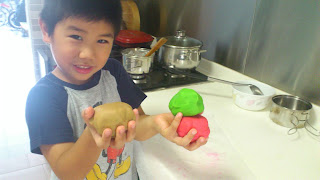 Posted by Dragonfly at 1:19 PM No comments: Links to this post

My boy loves potato; be it french fries, boiled, steamed or baked.  Mashed potato is one dish that he always orders when we dine at a western restaurant. This would be the first time I tried making Japanese mashed potato which receipe I adapted from Just One Cookbook.  Except my ingredients only included potato, egg, carrot, Japanese cucumber, Japanese mayo, salt and pepper.  For crushing, smashing, mashing or even breaking up, my son would be glad to give me a hand in the kitchen.  Using a potato masher, he did it gleefully.  On the plate, he has baked salmon and salads that consisted of baby romaine, boiled egg, tomatoes and Japanese cucumber. He was so eager to taste and eat his lunch that he actually abandoned his favourite cartoon TV show this morning.  He had an early lunch before 11 am!! "Very yummy!" he said.  :))

This craft was inspired from our camping trip in Darwin during the June holidays this year.  Besides crocodiles and different species of birds he learned, my boy also got to know about aboriginal's culture and art.  One of the infamous instrument would be the didgeridoo.  He was so fascinated with it that he made one for himself one day using toilet rolls.  I was absolutely at awe with his creation! Then, I suggested to give it a good paint by mimicking the aboriginal art.  We did not complete it the same day but painted when he was in the mood to do so (otherwise, Mommy would be the one painting).  And we brainstormed (like in the classroom) the colours by writing down on a white board.  He also chose to draw a rainbow serpent on it.  We painted the background in red first before proceed to draw the rainbow serpent with a black marker.  I helped him to outline its head for a start and the rest he did himself.  Then, finished with blue paint, dots of white and yellow paint.  The product turned out entirely different from the original plan.  Nevertheless, my boy proudly showed his masterpiece to our dear Papa that evening.   Daddy, of course, gave a thumbs up for it!!  Do you like it ?  I do very much :)) Here are the materials we used.

Posted by Dragonfly at 2:34 PM 4 comments: Links to this post

I have been coughing for more than two weeks and the western medication given by our family doctor does not help at all.  Incessant coughing coupled with pain in the neck and lower spine kept me awake the whole night.  Moody and miserable!! Therefore, I decided to go for Chinese Acupuncture for the first time.  After treatment, the pain miraculously vanished! And I slept well yesterday night except for a few coughs.  It's a huge relief!!!  I will not save on this kind of money at the expense of my health anymore.  The reason I hesitated seeking early treatment from Chinese physician is because my hubby cannot claim as medical expenses from his company and it is not cheap.

Happy that I am on the road of recovery, I made my son's favourite crabstick temaki for his lunch today which also included some tamagoyaki and Japanese cucumber favoured with mayo/wasabi/ fish roe. Green apple on the side.

I am glad my boy still has our pet dog, Nitro to play with when I was sick.

Posted by Dragonfly at 9:35 PM No comments: Links to this post

I did a National Day theme for my boy's lunch today.  The message I wish to convey was there are four major races in Singapore; Chinese, Malay, Indian and Eurasia.  I mixed a little soya sauce into the onigiri (rice balls) and added the facial details with nori.  And a touch of ketchup on each of their cheeks.  Would you be able to distinguish the races?  My son commented they looked "funny" though :P  In his box, he got stir-fried chicken thigh with ginger/soya sauce, fried egg with French beans (not visible because it was hidden underneath the onigiri), Japanese cucumbers, red grapes and an apple wedge that I carved our Singapore flag.

The other bento was prepared last Friday.  Cheek piggy was made of chicken breast patty coated with crushed corn flakes. Nori and cheddar cheese were use for the facial details.  There were two pieces of patties which I sandwiched with Japanese cucumbers and tomatoes. On the sides, he had slices of cucumbers, red grapes and a cube of laughing cow brand cheese.

We again spent our weekends without Papa who flew to Malaysia to attend family matters.  We were used to Papa's frequent travelling schedule (due to his nature of work and lately, for family matters).  My boy even more happy because he could 'sleep with Mommy'.  For the records, he does not sleep with us as he has his own room.  At the age 5 years old and 4 months, I would not expect him to help in household chores.  Other than, clean up his own mess after a meal and tidy up his own bed when he wakes up.  But last Sunday, he was so sweet that he volunteered to help me to wash the toilet and wipe the main door.  He was serious in the job although it was far from perfect.  I rewarded him with two gold coins for his effort ($2).

Linking up with A Happy Mum :-

Posted by Dragonfly at 4:51 PM 2 comments: Links to this post